In November last year, London unveiled a brand new pop culture attraction in the form of the Music Walk of Fame, and yesterday (March 2nd) ska legends Madness became the second act to be honoured with their own stone. Very appropriately, the Music Walk of Fame is in their hometown of Camden, which is only made more fitting by the rich musical history that this area of London holds.

Much like the Hollywood Walk of Fame, Camden's Music Walk of Fame was designed to feature discs on paving slabs in which names of iconic musicians would be etched. The Who were the inaugural recipients of a Walk of Fame stone, and this week two iconic Camden Town heroes are being honoured: Madness and the late great Amy Winehouse.

The latter already has an amazing bronze statue sculpted by Scott Eaton erected in her name in Camden, so her Walk of Fame honour tomorrow (March 4th) will mark yet another important stamp in her legacy.

While you might find it a struggle to name many more famous musicians who were actually residents of Camden, there's no denying that you might find it even harder to name a band that hasn't passed through this vibrant northwest London district. Coldplay famously performed their first ever concert at The Laurel Tree on Bayham Street (now a BrewDog pub).

If you fancy taking a musical tour of Camden then there are a number of venues you need to check out.

First of all, there's the Electric Ballroom which was first opened in 1938 by Bill Fuller under the name The Buffalo Club, then re-named The Carousel in the 60s and eventually gaining the name we all know and love in 1978. Over the years the Ballroom has played host to the likes of The Killers, Sir Paul McCartney, Megadeth, Kaiser Chiefs, U2, Prince, The Clash, The Boomtown Rats, Joy Division, The Smiths, Red Hot Chilli Peppers, Public Enemy, Blur, Garbage and many more. It was a also a huge hit in the 90s thanks to its Friday night goth disco Full Tilt.

Another classic Camden nightspot is Dingwalls Dancehall which opened in 1973 and has seen everyone from Gonzalez, Etta James and The Drifters to Red Hot Chili Peppers, Foo Fighters and The Strokes. While it's always been an eclectic venue, there's no denying it became popular with the punk movement in the late 70s.

In the basement of the World's End pub you will find The Underworld. The history of this alternative music venue is vague at best but we can estimate that it's been open a long time. It has hosted many major rock bands over the years including The Cranberries, Hole, The Offspring, Placebo, Queens Of The Stone Age, Radiohead, Sepultura, Smashing Pumpkins, Foo Fighters, Soundgarden, The Darkness, Sum 41 and Fall Out Boy.

Koko was initially opened as The Music Machine in 1977, before becoming Camden Palace in 1982 and eventually falling into disrepair. Thankfully, it was resurrected as Koko in 2004. Again, a huge array of musicians have performed there such as Madonna, The Damned, Christina Aguilera, Coldplay, Oasis, Bruno Mars, Thom Yorke, Lady Gaga, Kanye West and Katy Perry. Many feared that it had fallen once again when a fire broke out in January this year, but fortunately the fire was contained and it will be open again this Spring.

There's also a great pub culture in Camden. Dublin Castle was always a favourite of Madness to play live, and Amy Winehouse was a regular visitor there as well as at The Good Mixer - apparently a good place to escape paparazzi! It was also the place where the Blur vs. Oasis feud began so it's probably one of the most important Britpop landmarks in the country. 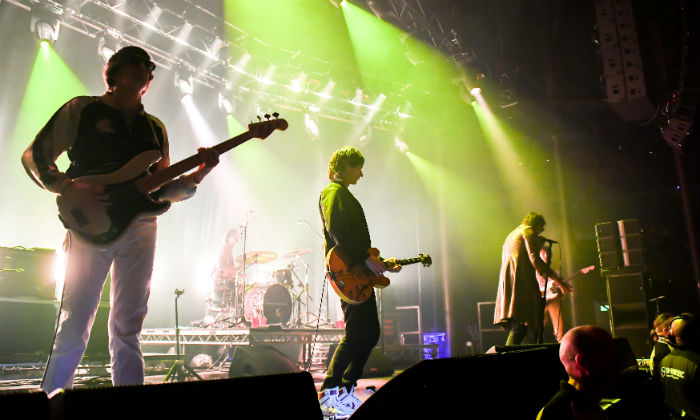 Possibly one of the oldest music venues in Camden is the Roundhouse, which was originally built in 1846 as a railway engine house. It was converted into a cultural centre in the 60s and boasts perhaps the most impressive list of previous performers we've looked at so far; we're talking Pink Floyd, The Rolling Stones, David Bowie, Jimi Hendrix, Led Zeppelin, The Doors, Ramones, Elvis Costello and Motörhead. While it closed for a time in the 80s, it was re-established by the late 90s.

Meanwhile, a number of festivals have passed through the town over the years, notably Camden Rocks which last year featured headliners Frank Turner and Deaf Havana, and has previously seen the likes of Bullet For My Valentine, Feeder, The Subways and New Model Army. This year, BBC Radio's 6 Music Festival will be coming to Camden with a line-up so far including Michael Kiwanuka, Roisin Murphy, Kate Tempest and Bombay Bicycle Club among others.

If you're not necessarily into live music but love listening, Camden Market is the place to go for records. Shop Camden Lock Vinyl, Wild Horses Music and Disc Disciples for second hand records of all genres, as well as Massive International for all your reggae needs. There are few places left in the world with this many record stores within such a short walking distance from each other. Just down the road you'll also find All Ages Records and Rock 'n' Roll Rescue, though you'll discover more than just records in the latter. It's a charity shop set up by guitar creator to the stars Philippe Duebruille and sells music memorabilia of all kinds, with all sales going to good local causes.

Camden really is the music centre of the city of London.