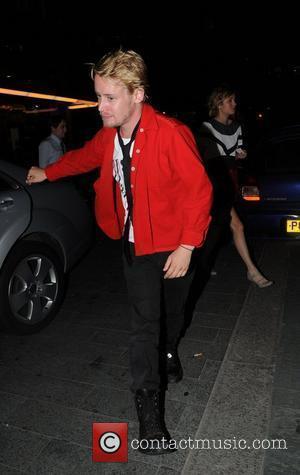 Picture: Macaulay Culkin celebrities leaving the after party for the new movie 'Scott Pilgrim Vs. The World' London, England - 18.08.10

Macaulay Culkin has been getting the press in a lather this week, after recent shots of the former child star showed the now 31 year-old looking somewhat gaunt, though nevertheless happy as he posed for a picture with a fan on the street. Both Entertainment Online and UK newspaper The Sun have expressed shock at the star's thin appearance, the latter pointed out his messy hair and facial fluff around his mouth - which admittedly is a very poor attempt at growing a beard. Entertainment Online meanwhile predicted that the picture would cause an avalanche of concern about the well being of Culkin, perhaps forgetting the fact that the star's fallen so far down the celebrity pecking order many people might not even remember who he was.
Personally we think we've seen Culkin look a lot worse, given the life he's had struggling to adjust to the huge fame thrust upon him after the first 'Home Alone' film back in 1990, we think he doesn't actually look that bad. Shooting to prominence in 1990 and then following it up in 1992 with 'Home Alone 2,' Culkin's life soon started to resemble that of a rather sad soap story, as he took his parents to court of allegedly mismanaging his finances.
Culkin was also arrested on several occasions for possession of drugs and has been through several relationships including a marriage to Rachel Milner for two years between 1998 and 2000. He's rumored to be starring in the British film 'Service Man' which is scheduled for release in 2013.