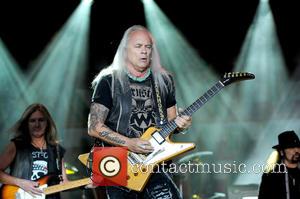 The group's frontman Johnny Van Zant tells Billboard his bandmate has still got "a lot of life ahead of him" after his health scare.

"Gary's doing good (sic)," he says. "I talked to him the other day, and we've got just a few shows left this year and I said, 'Man, let's just cancel 'em. Get your health straight and everything'. He was like, 'No, no, no, no, no'. He goes, 'Man, I've been going out by my lake and doing a little bit of meditating, and I was thinking about what's important to me and that's my family, my grandkids and playing the guitar. If I can get all of this right, I want to finish up these shows and this year.'

"That really impressed me, and he sounded great. It was a scare, you know, and any time anything happens like that it's a scare. But he's lived through a lot of stuff in his lifetime, so, yeah he's gonna be OK here."

Lynyrd Skynyrd postponed two shows earlier this month (Oct15) following Rossington's heart attack. The band is next scheduled to hit the stage on 7 November (15) at the Alabama National Fair in Montgomery, Alabama.