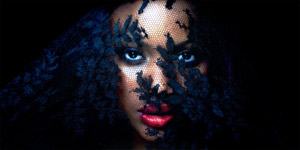 21 year old, Electronic Soul artist, Lulu James has created what she and co-writer/co-producer Domzilla describe as 21st Century soul, blending classic soul with glitchy, dark soundscapes. Hit single 'Closer' was released to public and critical success which led to James performing alongside Emeli Sande and on Later. With Jools Holland. Lulu prepares for the release of her debut album, due for release early 2014.

CM: 'Step By Step' has just been released, can you just tell us a bit about the track?
Lulu: The track is basically just explaining to my audience that I'd like to take it a step at a time with them and sort of let them in and get to know me properly first before they have my album so I don't just come out of nowhere. For some people, obviously, it'll be like, 'Who's this girl?' but the people that already know me, I'll just take it step by step with them and that's all. It was a very fun track, the video was influenced by the four elements and it was a very fun thing to do.