The investigation concluded that old materials are to blame, and other theatres need to play it safe

The dramatic collapse at London’s Apollo Theatre around 40 minutes into a performance of The Curious Incident of the Dog in the Night-Time late last year didn’t claim any lives, but unless something’s done to ensure other theatres don’t suffer the same fate, experts fear a catastrophe could be just round the corner. The heavy rein that preceded the collapse was thought to be the cause, however, the subsequent investigation has determined that old materials – in place from the theatre’s year of opening, 1901 – were the primary cause of the theatre’s dangerous breakdown.

In a statement, the council said: "Our investigation is still ongoing, however our inquiry to date has led us to understand why the ceiling at the Apollo Theatre failed in December. The principal cause was the deterioration over time of wadding ties which supported the ceiling, thought to be in place since its construction in 1901.” (via The BBC)

Now, experts are urging theatre managers across London’s West End to estate thorough checks of their various venues, including the ornate and aging ceilings that loom over some of the most popular attractions the city’s theatre district has to offer.

"As a result of this finding, we have a responsibility for health and safety reasons to issue guidance to owners of historic buildings, English Heritage, the National Trust and others regarding ongoing maintenance of similar ceilings. Our guidance outlines what precautions owners can take to ensure the safety of this ornate plasterwork, including thorough checks of suspended ceilings of a similar construction in order to preserve the unique heritage of our great London theatres and historic buildings," it said. The emergency services react to the Apollo's sudden collapse 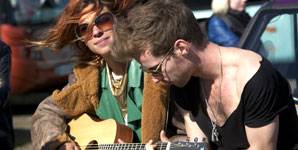