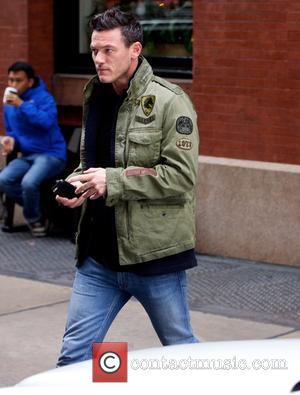 Welsh actor Luke Evans has issued a warning to stalkers and thieves who attempt to break-in to his home - he has an impressive sword collection and he knows how to use each one.

The Hobbit: The Desolation of Smaug star has made it a point to keep the weapons his characters use in films like Dracula Untold and The Three Musketeers as souvenirs, and they're mounted on his wall.

And he's particularly proud of his keepsake from the new Dracula film, explaining, "The sword I have in the movie is the most beautiful weapon I've ever used in a movie. The handle is a bronze dragon standing on his hind feet and his tail wraps around the hilt of the sword and his eyes are rubies.

"It was quite heavy and quite difficult to work with; my wrists increased! I had to change my watch from just my wrists getting bigger from fighting, putting pressure on the wrists, which is a very weird thing.

"It (sword) was given to me on my final day and it was all inscribed by the Universal family. I feel very lucky to have it, but God help any burglar that tries to enter my house, that's for sure!"