Did Luke Bryan Cheat His Way Through The National Anthem? 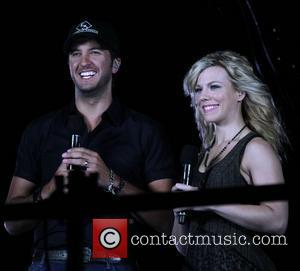 American country star Luke Bryan has caused a stir in the music world, after seemingly using a 'cheat sheet' to help him through a rendition of the National Anthem at the Mlb All-Star game on Tuesday (July 10, 2012).
Bryan first aroused suspicion after viewers noticed him continuously glancing down at his hand. One Twitter fan wondered whether he was simply checking his watch, while another joked, "Luke Bryan sings the national anthem the way I used to take geometry tests". Bryan initially claimed he had indeed been checking the time, tweeting back, "I did check my watch because I knew the stealth bomber would fly over 2 minutes in and I knew a started a little late". However, he eventually came clean, saying, "I had a few keys words written down to insure myself that I wouldn't mess up. I just wanted to do my best. I promise it was from the heart", adding, "If I offended anyone with my approach I sincerely apologize. Anytime I sing the anthem it is an honor and my heart beats out of my chest". Most of his fans didn't seem to mind that Bryan had checked the lyrics, with one writing, "I don't even care that Luke Bryan had the words written on his hand", while Kellie Picker wrote, "Great job on the anthem!".
In fairness to Bryan, it was probably a shrewd move to write down the lyrics, given that countless singers have flubbed the song in the past. Christina Aguilera most recently made an almighty mess of the historic song, singing her own lyrics in an attempt to try hide her mistake.