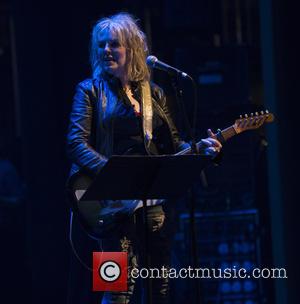 Picture: Lucinda Williams - Celebration of the 60th anniversary of Allen Ginsberg's 'Howl' with music, words and funny people at The Ace Hotel Theater at The...

Lucinda Williams says she has written about war for the first time, on her new album 'Blessed'.
LUCINDA WILLIAMS, the American country music singer-songwriter, releases her new album 'Blessed' today (1st March 2011) and the 58-year-old says the record contains her first stab at writing an anti-war song, reports the Calgary Herald.Williams rose to prominence after releasing her 1998 album 'Car Wheels on a Gravel Road', which went gold and earned the songwriter a GRAMMY AWARD. The album was also universally acclaimed by critics and she was named 'America's Best Songwriter' by TIME magazine in 2002. On the new album, 'Soldier's Song' is told from the dual perspective of a man fighting for his country overseas, while his wife is at home with their child. Williams says writing the track was particularly difficult, saying, "It's a subject matter I've been wanting to write about, but it's not easy to do without pointing a finger and getting your politics all involved in that. I'm better at the humanitarian aspect, writing from the person's feelings. I've always wanted to write some topical songs. It's really hard for me. It ends up sounding too corny". The singer-songwriter now heads out on an intimate solo tour, which will see her playing tiny venues such as the Dakota Jazz Club in Minneapolis.
'Blessed' has been produced by the legendary music guru DON WAS, the man behind some of Bob Dylan, Bruce Springsteen and THE Rolling Stones' biggest records. LUCINDA WILLIAMS met the producer one year ago at a Grammy Awards tribute to Neil Young and says he gave the album a much needed boost, adding, "Bob remixed it, and it just pushed everything up a notch, or two, or three".