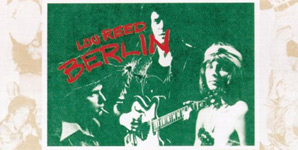 For those of you born this side of Never Mind The Bollocks, Lou Reed's Berlin was originally released in 1973, directly following the noir-ish (And strong selling) glam rock of Transformer. Much to the chagrin you imagine of RCA's executives, Reed and producer Bob Ezrin then crafted a relentlessly dour concept album, centred around the mutually self destructive relationship between it's two main characters, Caroline and Jim. With subject matter ranging from drug abuse to domestic violence to suicide, thematically it refracted both the final throes of hippy comedown and the spiralling paranoia and lost cultural self esteem of the era.

Unsurprisingly a commercial disaster, Berlin's moral ambiguity and gutter storytelling was never acknowledged by Reed in a live context, although it provided the inspiration for countless songwriters since. This was until late 2006, when in a tiny Brooklyn venue over a five night period he set about recreating it as a piece of performance art, complete with ensemble band, the Brooklyn Youth chorus and a stage set designed to look like a cheap, junkie strewn hotel. Released now, the sound is pin sharp, Ezrin is roped in again for like, total authenticity and it's beautifully packaged in a gatefold sleeve with a full colour photo booklet etcetera, etcetera.

And you know what? it's pointless. And you know what's worse ? (Feels himself about to sent directly to rock critic hell for slagging off one of rock's sacred cows - thinks Jesus, how could I, this man wrote Perfect Day for crisssakes..) it's really, really boring. A horribly attritional listen - with the exceptions of the never-ending Sad Song and Sweet Jane - what was in it's original guise was a groundbreaking piece of gritty rock theatre is rendered into a minimalist jam session for the worthy. OK, so only the miserable would deny that Reed deserves kudos and respect, but trust me you can live quite happily ever after without hearing a note of this record. If you want to âRe-evaluate the album's visceral powerâ or some other such tripe the marketeers would have you believe, simply download the original, turn down the lights and get a box of paper hankies in.