The band members are proud of sticking together throughout the scandal.

Welsh rockers The Lostprophets were shocked at finding out that Ian Watkins was a paedophile, but refuse to be associated with their former bandmate, who confessed to sexually abusing a one-year-old girl and was sentenced to 35 years back in December. 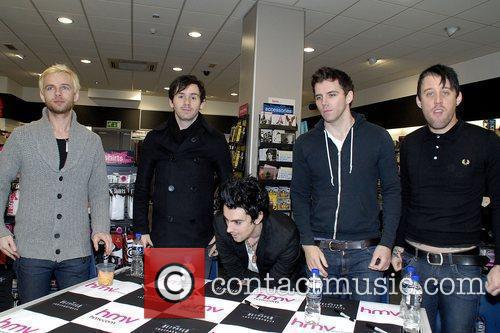 The former bandmates have not performed with Watkins since 2012.

Recently, the case has risen in popularity again as Watkins is about to contest his sentence. On Wednesday, a Cardiff court is to decide whether the musician has grounds for appeal. Watkins is not denying his guilt on 18 counts of attempted rape and sexual assault, sexual assault involving children and taking, making and possessing indecent images of children. However, he thinks that his sentence is too severe and is looking to have his term (29 years in prison and 6 additional years on license) reduced.

Recently, his former bandmates spoke out about Watkins, the arrest and the effect all of it had on the band.

"When 15 years of your life is washed down the toilet in that one moment, it's harsh to take in," said Mike Lewis, the band's rhythm guitarist, for The Independent.

Lead guitarist Lee Gaze added: "There was two sets of it [shock] because there were the accusations - which was one thing.

"And then there was the actual, 'Yeah I did do it' which was a year later. He dragged that out for a year, so we got hit by it twice."

Watkins’ bandmates felt they were being lumped in with him, and want to make it clear that they were not aware of his disturbing activities.

"How could you know? How would you know?" Gaze said. "Who would disclose such a thing to five people, who between them have eight children? You just wouldn't because they would be killed on the spot."

Watkins denied the charges initially, but pleaded guilty on November 26, 2013.

The five musicians, who have now reunited under the new moniker No Devotion, said Watkins had become increasingly distant towards the end and rarely spent time with the rest of the band. Now, half a year later, Gaze, Lewis, Stewart Richardson, Luke Johnson and Jamie Oliver are trying to move on from the case and recover some modicum of success with their new musical project.

"It's time to move on and we just want to focus on that from here on in,” said Lewis.