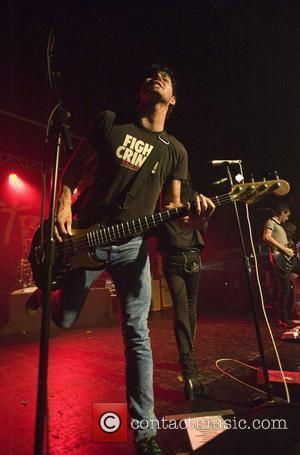 Lostprophets star IAN WATKINS has taken aim at Jared Leto for complaining about a legal spat that threatened his band 30 Seconds to Mars' album release, insisting the actor-turned-rocker had it easy.
30 Seconds To Mars was sued by the parent company of their label Virgin Music for $30 million (£18.75 million) in 2008 over claims they failed to produce an agreed number of albums.
Leto spoke openly about the difficulties the band faced while recording their third album This Is War during the ongoing dispute, telling MTV, "We spent two years of our lives working on that record, and it was us against the world. Everything that was going on was brutal... It was a case of survival, to tell the truth."
But the Lostprophets frontman maintains Leto should stop grumbling about the ordeal - because the Welsh band endured a worse struggle to make their upcoming disc, The Betrayed.
Watkins tells Kerrang! magazine, "We were always determined to make it happen, but it has been tough. When I hear Jared Leto saying he went to hell and back writing the 30 Seconds To Mars album it makes me think, 'I want to f**king kill you!' Went to the swimming pool and back more like. This, our band, is all we have - there is no safety blanket for us. So we were always like, 'S**t, we need to get this record out and it needs to be amazing because if it doesn't come out we are f**ked.'
"The making of The Betrayed was a transitional period for me, a period when a lot of things in my life were changing, with relationships and moving to L.A. And, of course, the other guys had their own issues too. For the past 10 years we've been living our dream and I guess all the insecurity and confusion around making this album gave us time to realise that we didn't want to lose it all."
Lostprophets scrapped an album's worth of material and rerecorded The Betrayed, pushing back its original release date by three years due to further problems with producers and their record company.