Lorde thanks fans after Grammys win

Lorde has thanked fans after picking up two awards at the 56th annual Grammy Awards in Los Angeles last night (26.01.14). 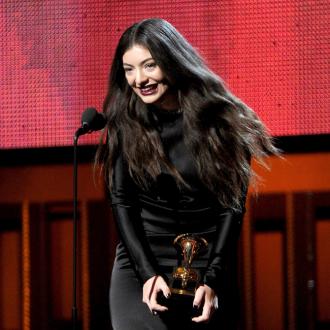 The 17-year-old singer, who picked up gongs for Song of the Year and Best Pop Solo Performance for her debut single 'Royals', took to Twitter to thank her supporters and praise friend Taylor Swift for her performance on the night.

Lorde tweeted: ''I am so grateful for the attention my work has received tonight and this year. thankyou and goodnight. (sic)''

After Taylor performed 'All Too Well' at the 56th Annual Grammy Awards, Lorde gushed: ''Very proud of @taylorswift13 tonight. one of the most masterful performers I've seen. (sic)''

Lorde performed her track 'Royals' at the ceremony at the Staples Centre in Los Angeles and paid tribute to co-writer Joel Little while accepting the award for Song of The Year.

She added: ''Thank you to everyone who has let the song explode, because it's been mental.''

Taylor also posted a photograph of her with the New Zealand star on Twitter, accompanied by the caption: ''And you know... We're on each other's team. #LORDE #CLEANINGUP #GRAMMYs. (sic)''

The singer, 24, missed out on winning an award after being nominated for Album of the Year for 'Red', which went to Daft Punk for their chart-conquering release 'Random Access Memories'.