Review of Royals Single by Lorde

Lorde (real name Ella Maria Lani Yelich-O'Connor according to Wikipedia - wow!) has truly stunned me with her debut single 'Royals'. For someone so young (just 16-years-old) she shows a remarkable level of maturity in her music; I know that's an obvious cliché but I don't think it will ever cease to amaze people just how much musical dexterity youngsters seem to have these days. 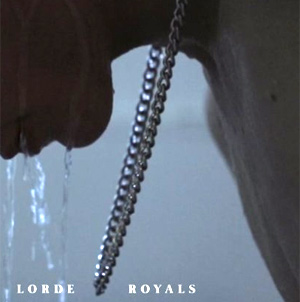 This song is taken from her Platinum-certified debut album 'Pure Heroine', which has shot straight to the top of the charts in her home nation New Zealand, and is lyrically very sincere. In the song, she talks about knowing your roots and not caring that you'll never be rolling in the millions with 'jet planes, islands, tigers on a gold leash' - she knows what she should be aiming for in life.

Lorde's vocals didn't strike a chord with me at first; it feels like ever since Amy Winehouse, God rest her, enchanted the world with her jazz/soul crooning, every female vocalist in the world suddenly has a low-pitched, husky voice with over-emphasised vibrato - Adele, Paloma Faith, Duffy - Lorde is just the latest in that category and, for me, it's getting pretty predicatable.

You can't deny she's still an amazing singer, however, and her pipes totally dominate this track which has little in the way of anything else making a sound apart from some finger clicking and a dull, repetitive drum beat. The fact that it's stripped back and almost a cappella fits with the feeling of the raw, unembellished life she has been leading 'in a torn-up town (no postcode envy)'. With such minimal instrumental, the choral build-ups being created out of pleasant vocal harmonies rather than more layers of instruments, it's incredible how it so seamlessly engages the listener forcing them to nod their head, tap their feet and click their fingers with almost no control over themselves (I challenge you to sit still while listening to 'Royals'!).

With a tune as catchy and optimistic as this, Lorde better be thinking about how she's going to spend her first million - a gold-leashed tiger doesn't seem so silly now, does it?