Country group Lonestar have reunited with original lead singer Richie Mcdonald to celebrate their 20th anniversary with a new album and tour. 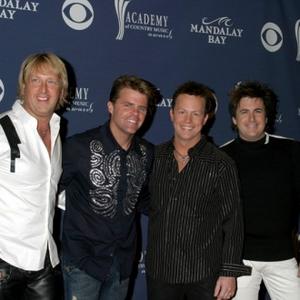 The singer has rejoined the group, replacing Cody Collins, who had taken his place in 2007 when he left to pursue a solo career.

The band have subsequently announced plans to record a new album and to tour in 2012, including a set of concerts in Europe for the International Festival of Country Music.

'Amazed' hitmaker Richie said of his return: "Well, five years has come and gone since I left Lonestar. We've all tried other avenues and the fact remains that some things were just meant to be.

"I miss those crazy nights running around on stage making music with my BAND OF BROTHERS. Looking forward to a new chapter in the book of Lonestar and reliving some old memories and also making some new ones for the fans that have been loyal to us through thick and thin."

The group - which also includes Michael Britt, Keech Rainwater and Dean Sams - will perform at the country music festival in England, Ireland, Switzerland and Germany alongside other country artists including Reba McEntire, Ricky Skaggs and Little Big Town, among others.

The International Festival of Country Music originally ran for 23 years from 1969 to 1991 and was a showcase for now legendary artists including Dolly Parton, Johnny Cash, Willie Nelson, Tammy Wynette, Jerry Lee Lewis and Crystal Gayle, among others.

The Festival comes to Wembley Arena in the UK on Sunday, February 26th, 2012.