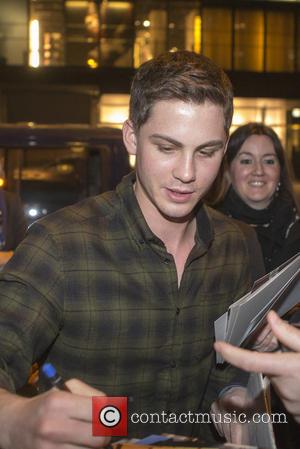 Picture: Logan Lerman - The cast of the film NOAH arriving for dinner at Borchardt restaurant on the evening ahead of the german premiere. - Berlin,...

The two star as battle-hardened soldiers in the new World War Ii drama and director David Ayer was keen to ensure his cast was up to the task when it came to the movie's fight scenes.

The actors were ordered to take part in early morning fight training and Lerman was impressed to see 50-year-old Pitt was still able to keep up with his younger colleagues.

Lerman tells ShortList magazine, "I think Brad Pitt is one of the coolest tough guys in movie history. Fight Club is one of my favourite films and Tyler Durden is one of the most bad**s characters ever. Every morning at 5am, David Ayer had us put on UFC-style padded clothes and fight each other for a few hours. I forgot Brad is f**king 50 you know? He's in killer shape and f**king fought with the young dudes. He still looks like Tyler Durden."