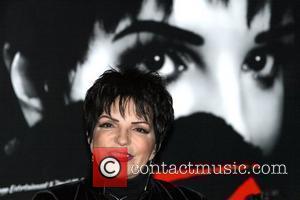 Picture: Liza Minnelli holds a press conference ahead of her concert at Sydney Opera House on August 16, 2009 Sydney, Australia - 13.10.09

Liza Minnelli has given away the SEX & The City movie sequel's biggest secret - she'll be performing with Barbra Streisand in the film.
The actress/singer plays a marriage celebrant at the gay wedding of characters Stanford and Anthony, and now she's revealing all about her hilarious scenes.
As well as performing Beyonce's Single Ladies (Put A Ring on It) hit, backed by two female dancers in wigs, Minnelli tells the Sydney Morning Herald newspaper that fellow diva Streisand will also appear in the sequel's lavish wedding scene.
The entertainer tells the Australian publication she had a lot of fun perfecting Beyonce's moves: "The choreography for the number is something I should have done when I was 22."