British director Andrew Douglas (2005's Amityville Horror remake) takes a clever look at youthful naivete in this strikingly inventive thriller, which is based on a true story. Its focussed perspective lets us see the events unfold as the main character might, and watching him misinterpret everything is seriously unsettling.

That character is the cool North London teen Mark (Blackley), who avoids his annoying parents (Womack and Delamere) by hiding in his room while chatting online to local teen Rachel (Winstone). She has gone into witness protection because of her brutish boyfriend (Johnston), and she asks Mark to look out for her nerdy little brother John (Regbo), who's being bullied in school. As they hang out together, Mark and John strike up a friendship. But when Rachel disappears, Mark begins chatting online to an MI5 agent (White) who convinces him that he needs to take violent action to save lives at school.

Right from the start, we suspect that something is up with the people Mark meets in internet chatrooms. But we also understand why he doesn't question anything: the setting is 2003, rife with still-gurgling paranoia after 9/11 and Columbine. Also, the film intercuts Mark's story with the aftermath of his actions, as he's interviewed by a tenacious detective (Downton Abbey's Froggatt). So we know that we are seeing the people he's chatting to through his mind's eye, which is why director Douglas makes the eerie decision to show them talking to their computers rather than just typing. We question whether they're real, but Mark never does.

The Woman In Black Review

By Rich Cline
Excellent
Based on both the Susan Hill novel and the hit stage play, this creepy ghost story is nicely translated to the screen with a growing sense of menace that keeps us constantly on edge. It's the especially strong directing and writing that bring it to life, as it were. 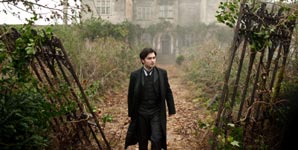 In early 1900s London, single dad Arthur (Radcliffe) is a young lawyer in trouble with his boss (Allam), so his next case is make-or-break. To settle an estate, he heads to an isolated Northeast village that gives him a cold-shouldered welcome. And when he gets to the abandoned seaside mansion, he sees the spectre of a woman (White) lurking in the corners. A friendly local (Hinds) is cynical about this, even though it also haunts his wife (McTeer), who is grieving over their son's death. And dying children are a theme in this village.