Liv Tyler has revealed her friends are always telling her they are attracted to her father Steven Tyler. 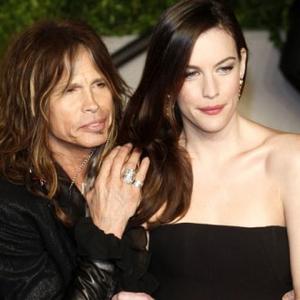 Liv Tyler's friends have crushes on her dad Steven Tyler.

The 33-year-old actress admits her pals find the 63-year-old Aerosmith singer - who is also a judge on 'American Idol' - very attractive and aren't shy to tell her.

She revealed: "I'm proud of my father. I admire his courage to do 'American Idol' at this time of his life. He's fabulous. Charming. Magical. Friends my age tell me, 'I have a crush on your father.' "

Despite their busy careers, Liv insists she and her father always make an effort to see each other and are constantly in contact.

She added: "We're both busy working, but we see one another. We speak. We text constantly."

Liv also revealed she has moved back to New York City with her six-year-old son Milo following a brief stint living in Los Angeles and she is very happy to have moved back.

Speaking at the premiere of her new movie 'The Ledge' at the Landmark Sunshine Cinema on Tuesday (21.06.11), she told New York Post columnist Cindy Adams: "You know what's great? Moving back here. I was born here. Always lived here. I moved to Los Angeles for over a year. But it's not for me. I must be in New York, which has everything. Freedom. Excitement. Life. Breath. Electricity. Diversity. It's also dirty, but so what? I moved back in August. Everything's great here. There's even a nearby playground where I bring my son. I can take time to be a real mother."