British Pop Stars Little Mix Want To Perform A Duet With The Spice Girls And Support Them On A Reunion Tour. 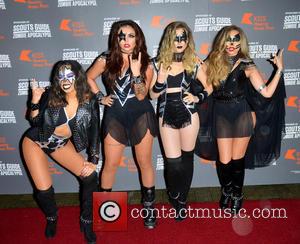 Reports suggest the 1990s girl band will make a comeback next year (16) to mark 20 years since they first stormed the charts with their debut single Wannabe.

Now Little Mix members Perrie Edwards and Jade Thirlwall have delivered a plea to the Spice Girls, asking the pop veterans to include them in the rumoured reunion plans.

"We'd love to be involved with it," Perrie tells Britain's Daily Star newspaper. "We love the Spice Girls and want to perform with them. They know that."

"Hopefully we get to support them (on tour) and do a duet," adds Jade.

Despite the excited talk from Jade and Perrie, Spice Girls star Melanie Chisholm has indicated the group currently has no firm plans to return, although she would like to get them back together for a show in London's Hyde Park.

"We've talked about it, but we just haven't got our act together," Mel told Britain's Daily Mirror newspaper. "We're a bit useless. But performing at Hyde Park would be amazing. I went to see Taylor Swift there this year and it was so wonderful. It was a really good, fun gig. I think for the Spice Girls that would be appropriate. It's a bit more friendly."

A potential Spice Girls reunion looks likely to go ahead without Victoria Beckham, who is busy running her own fashion label and is reportedly not interested in rejoining her bandmates Geri Halliwell, Mel C, Melanie Brown and Emma Bunton.