British Girl Group Little Mix Are Hoping To Follow In The Footsteps Of The Spice Girls And Land A Deal To Star In Their Own Big Screen Film. 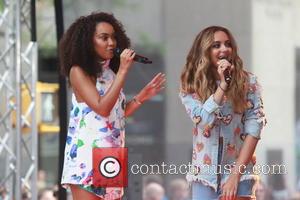 The Black Magic hitmakers kicked off their careers when they were formed on TV talent show The X Factor U.K., but now that they've found fame outside the show, they're hoping to branch out into a different medium.

In an interview with San Diego radio station Z90, singer Jesy Nelson said, "Our long term goal is to take our Get Weird tour all across the globe and we also want to have a movie."

The group's goal is similar to that of the Spice Girls in the 1990s, when they starred in a critically panned but cult favourite Spice World.

The Wannabe hitmakers played themselves in the film, which was a box office success, garnering more than $100 million (£62.5 million) worldwide and breaking the record for the highest-ever weekend debut for Super Bowl Weekend (25Jan98) in the U.S., raking in $10.5 million (£6.5 million).