British Pop Stars Little Mix Have Won Praise From Kiss Guitarist Gene Simmons After Dressing Up As The Rockers For A Halloween Show. 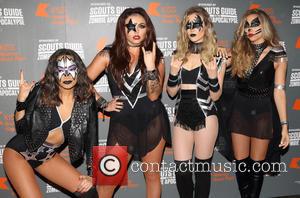 The Black Magic stars donned the band's iconic black and white make-up and leather costumes for a performance at the Kiss FM Haunted House Party at Wembley Arena in the British capital on Thursday night (29Oct15).

Gene has now given his backing to the stunt by sharing pictures of the girls in costume online.

The rocker added two snaps of Little Mix as KISS on his Twitter.com page after his son Nick alerted him to Perrie's look, tweeting, "Hey pops, I think she does it better..."

Peter and Ace both left KISS, and their make-up is now worn by current members Eric Singer and Tommy Thayer respectively.

After the show, Little Mix posted a message on the band's Twitter.com page, which reads, "Thanks so much @KissFMUK for having us at the #KissHauntedHouseParty tonight! Loved it! Hope you enjoyed our... outfits!"

The band is due to release a new album, Get Weird, on 6 November (15), and they have also confirmed they are heading out on a U.K. tour next year (16).

The Get Weird Tour kicks off in Cardiff, Wales in March (16) and will stop in English cities including Bournemouth, Brighton, Liverpool and Leeds, and they have also announced extra shows due to a high demand for tickets.

The additional shows include dates in London, Manchester and Nottingham in England, and Glasgow, Scotland.

The band tweeted of the announcement: "The new dates for the #GetWeirdTour are on sale now! Go get em' quick Mixers!"