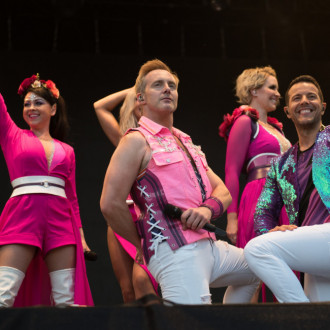 The pop group - which consists of Lisa, Lee Latchford-evans, Claire Richards, Faye Tozer and Ian 'H' Watkins - released their debut album, 'Step One', in 1998, and Lisa can barely believe that they're still making music now.

She shared: "We never thought we’d be here 24 years on, talking about a new album and a new tour. It’s incredible so much has come from one single deal all those years ago. We feel very blessed to have had the support we’ve had.

"But we have also worked very hard. The first time around, we were often so busy we didn’t know what country we were in."

Lee admitted that the band struggled to enjoy their chart success in the early years.

He said: "Back then, the joy was taken out of it because it was a machine. We were going everywhere, we didn’t have a lot of breathing space."

Meanwhile, Claire explained that she's also seen the "darker side of the industry" since she joined Steps.

The 44-year-old singer recalled a time when she was pressured to put the group's success ahead of her own health.

Speaking to The Sun on Sunday newspaper, she recalled: "Looking back, we weren’t really seen as human beings by the people around us.

"On one occasion I found a lump, and I booked a doctor’s appointment to get it checked. When I told them, they asked me to re­arrange it.

"We had radio interviews to do that day. That was one of the few times I stood up for myself and said, ‘No, this is more important’. But I felt so guilty. Things like that were the darker side of the industry for us."