With their third present-day Tolstoy adaptation, filmmaker Rose and actor Huston continue to skilfully explore timeless issues with an urgent, modern style of storytelling that feels almost documentary. Based Master and Man, this film shifts a bit jarringly from a social comedy into a dark thriller. And its themes are less personally resonant than either Ivansxtc or The Kreutzer Sonata. 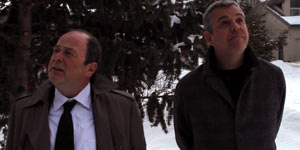 This time Huston plays Basil, a Los Angeles businessman struggling with very bad debts. To make some quick cash, he abandons his family on the day after Christmas, flying to Denver to buy up some foreclosed houses and make a quick profit. Once there he teams up with chauffeur Nick (Jacobs), who drives him from house to house, eventually heading up into secluded bedroom communities in the Rockies. But after hanging out in a bar for the afternoon, they get lost on an isolated road as darkness falls. And when they get stuck in the snow, their thoughts turn to survival.

With two characters on distinct sides of the 1/99 percent divide, the film is strikingly relevant today. Especially since both men are in such precarious positions and yet still have such disdain for each other. Boris continually mocks Nick for being unfamiliar with his own new car, while Nick never even tries to conceal his contempt for Basil's callous privilege. Both Huston and Jacobs make the most of this, throwing barbed wit into their ongoing conversation while also clearly trying to find some common ground. So the moments of genuine friendship are surprisingly warm.