Lionel Richie Stuck On You 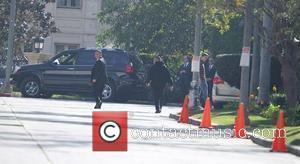 Picture: Activity outside of Lionel Richie's home on the rumored wedding day of his daughter Nicole Richie to Joel Madden. Los Angeles, California - 11.12.10

Lionel Richie's track Stuck On You has been named the most popular love song of all time.
The 1984 hit topped Last.fm's rundown of the most romantic tracks their users listen to, while it was closely followed by the Bee Gees' Follow the Wind.
Mohit Chauhan's Tu Ne Jo Na Kaha came in third, and One In Love by now-defunct British boyband A1 was fourth.
Richie's Truly rounded out the top five, and the singer proved popular in the rundown - Endless Love was the seventh most-listened to song on the music streaming service.