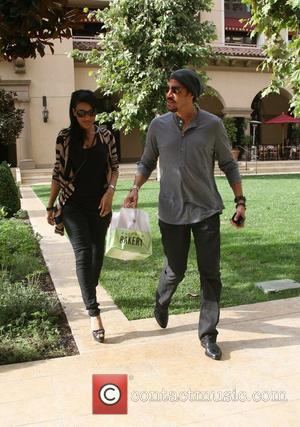 Lionel Richie is making the foray into country music and has teamed up with the likes of Willie Nelson, Blake Shelton and Shania Twain for new record 'Tuskegee'. Set for release in March 2012, the album features 13 of the singer's biggest hits, re-recorded with a country twist.
According to Cmt.com, the former Commodores man will be joined by Rascal Flatts, Darius Rucker and Little Big Town to perform a selection of the songs during this year's Cma Awards show. The album's title refers to Richie's hometown in Alabama, where he first gained prominence in the 1970's scoring multi-million selling hits such as 'Easy' and 'Sail On', both of which are reworked on the country record. The tracklisting reveals several notable collaborations, including a rendition of 'You Are' with Shelton. He also teams up with country legend Kenny Chesney for 'My Love' and veteran Willie Nelson on 'Easy'. Though predominately a pop, soul and R&B vocalist, Lionel is no stranger to the country genre, having penned the No. 1 country hit 'Lady' as well as Alabama's Top 10 single 'Deep River Woman'. In a statement circulated by the Cma Award organisers, Richie discussed his passion for the genre, saying, "I was born and raised in Tuskegee, Ala. I am a country boy and proud of it. To do this project just felt natural".
The singer will give fans a preview of 'Tuskagee' at the 45th annual Cma Awards on 9th November 2011 in Nashville. The show will air live on ABC.