A Police Hunt Has Been Launched For Two Young Missing Music Fans Who Disappeared After Attending The Storm-hit Rocklahoma Festival Over The Weekend (23-24may15). 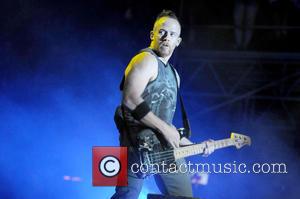 The music festival in Oklahoma was hit by severe weather and tornado warnings on Saturday (23May15) which prompted organisers to cancel the headline performance by Linkin Park and order attendees to take shelter.

It has now emerged that two fans who were supposed to have left the festival on Saturday never made it to their destination, and a search has now been launched for Cody Parrick and Ben Babar, both 20.

They were last seen at Rocklahoma on Saturday, and police are now hunting for the pair, and the silver 2005 Pontiac Montana van they were travelling in. Anyone with information is urged to contact the local Okmulgee County Sheriff's Office.