Rocker Chester Bennington's Ankle Injury, Which Forced The Cancellation Of Linkin Park's Recent Tour, Was Sustained During A Game Of Basketball Hours Before A Show In Indiana. 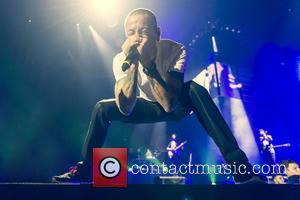 Picture: Linkin Park and Chester Bennington - Photographs of American Nu metal band Linkin Park as they performed live in concert at the O2 arena in...

The Numb hitmakers announced they had to scrap the remainder of their The Hunting Party Tour dates in January (15) after Bennington broke his ankle prior to a concert in Indianapolis, where he appeared onstage with crutches.

He underwent surgery days later and now video footage documenting the start of the doomed tour has revealed exactly how the singer suffered the nasty injury on the day of the Indianapolis gig.

The video clip, posted on the band's YouTube.com page, shows Bennington playing basketball on an indoor court with members of Linkin Park's supporting acts, Of Mice & Men and Rise Against.

After walking out of the shot to practise his dunking skills, the camera pans back to Bennington, who suddenly appears on the floor, writhing in agony.

As his pals gather around him and a medic attends to the injury, he explains, "I... landed on the water bottle, and my ankle turned."

Bennington was taken to a local hospital for treatment, although he returned to the venue that evening to play through the pain for fans in Indianapolis.

The trek was subsequently axed to allow Bennington time to fully recover.