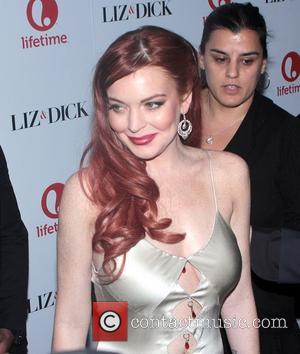 While working on Scary Movie 5 with Charlie Sheen, Lindsay Lohan flat out refused to kiss the erstwhile Two and a Half Men star, reports TMZ.

According to sources the script called for her to kiss Sheen three times in the scene in the bedroom, but she couldn't bring herself to even kiss him once! This is all due to his 'spotty history' and wild partying days, apparently, and for some reason she fears where he's been. They both had to sign releases that neither of them had cold sores, such were Lohan's fears. She'd told the producers ahead of production taking place about her trepidations, but it was too late to change the script - they even tried to use body doubles, but apparently they didn't really work and as much of the kissing as possible has since been written out.

Many people feel that Lindsay's being a bit of a hypocrite, but there's no need to jump to Sheen's defence because apparently he didn't care- and proved it by giving her a wopping $100k. In other Lohan news, she's still in a whole bunch of debt, and she's set to return to court after the revocation of her probation having lied to police about crashing her Porsche - she could face over 200 days in jail. She's never filled a term yet so we're not holding out much hope of that.