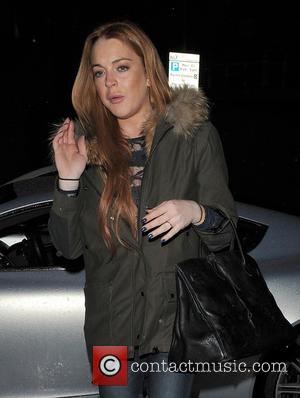 Picture: Lindsay Lohan - Lindsay Lohan leaves the private residence where she is staying during her trip to England, and heads to a friend's house in...

Lindsay Lohan's on-set no-shows while she was filming Mean Girls a decade ago freaked out two male co-stars - because they had to act out scenes without her.

As part of the film's 10th anniversary celebrations, castmates Jonathan Bennett and Rajiv Surendra have opened up about what it was like working with a teenage Lohan, before her life started spiralling out of control.

Bennett, who played Aaron Samuels in the movie, recalls the actress failed to show up on the first day of filming.

He says, "The first time I worked with Lindsay was day one of filming. It was the math scene and she had gotten pink eye and wasn't able to come to set, so I shot my coverage of that with her stand-in."

But Surendra had to act to thin air when Lohan failed to show for his scene.

He adds, "The very, very, very first scene that was ever shot for the movie was the scene where I walk up to Lindsay and give her my card. Lindsay wasn't feeling well that day and because they were covering me, they allowed her not to show up on set.

"So, the very first scene of the movie was me speaking to her and she wasn't there. That was really, really hard because I think everybody was working out their kinks. Everybody was green."