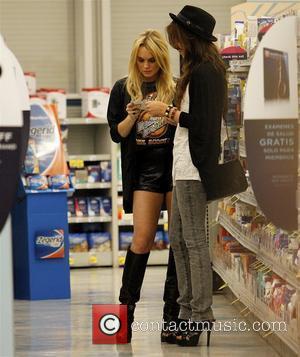 Lindsay Lohan has been moved to solitary confinement in jail - because her fellow inmates are sick of her wailing, according to a newly-released convict.
Cheryl Presser claims the actress is really struggling with life behind bars and can't stand the taunts from inmates who share the same area of Lynwood Correctional Facility in California.
The former inmate tells PerezHilton.com that prisoners chant Lohan's 'firecrotch' nickname as the Mean Girls star tries to get to sleep and those in the cells closest to her can hear her sobbing.
Presser says, "Lindsay would lie there shivering all night, crying and covering her face with her hands. Her wailing was keeping everyone awake... She had a hysterical fit, crying and yelling, so she got put in isolation."
But it's not all bleak news behind bars for Lohan - her lawyer insists the actress has made friends in jail.
Shawn Chapman Holley says, "She has made friends and the deputies have treated her respectfully (and she them)."
Lohan surrendered to authorities and began her 90-day jail stint last week (20Jul10). Her time has already been cut short and she is expected to be released at the beginning of August (10).
The actress was jailed after violating probation stemming from a 2007 DUI arrest.