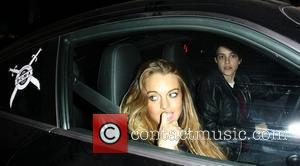 Actress Lindsay Lohan is suffering the effects of the global economic crisis - her financial problems have reportedly forced her to borrow money from her girlfriend Samantha Ronson.
Lohan admitted her money troubles in a recent interview with Nylon magazine, telling the publication she is struggling to pay the mortgage on her Los Angeles home as she has not made a movie since 2007 box office flop I Know Who Killed Me.
And now the New York Daily News is reporting that Lohan's cash crisis has deepened due to her excessive spending, leaving her borrowing from her DJ partner to support her extravagant lifestyle.
A source tells the publication, "Lindsay is spending like crazy! Shes living on credit right now. She has no cash. The problem is, the money being spent is mostly Sams because Lindsay doesnt really have any of her own at the moment. Sam really thinks Lindsay needs to learn how to become a recessionista and manage her money better."
While another insider adds, "Lindsays money situation has never been great, but its only gotten worse over the last month. For every dollar she makes, she spends double. Her personal appearance fees are literally the only thing keeping her afloat. Because of her explosive relationship with Sam, shes unable to get the type of cash shes used to. The negative press and constant appearance cancellations are hurting her pocketbook.