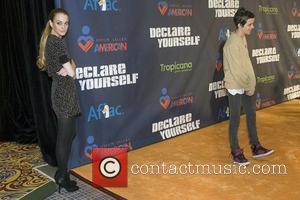 Lindsay Lohan's dad MICHAEL is convinced his daughter's relationship with Samantha Ronson is "destroying her life", and is begging friends and fans to help "save" her. Michael Lohan has regularly voiced his disapproval of the union, since the Mean Girls star started dating the DJ last year (08).
His comments sparked an online war of words, with both trading blows via their blogs. Michael even accused Ronson of impersonating his daughter online - a claim she vehemently denies.
The 48-year-old later declared a truce with Lindsay - but he has now gone back on his word by blasting Ronson in his latest online posting, claiming the DJ is using his daughter for financial gain.
He writes, "After seeing promise and thanking God for Lindsay's freedom from SaMANtha's bondage, I see now, that since SaMANtha has once again, weaseled her way back into Lindsay's life, things have taken a dark turn."
Michael Lohan then posts a series of paparazzi photographs of the actress shopping with her younger sister Ali - and slams Ronson for driving a wedge between the pair.
He continues, "While I was enthused that Ali was with Lindsay, rather than SaMANtha, I am torn to see that SaMANtha has once again manipulated Lindsay into leaving her little sister in L.A., only to join SaMANtha on another DJ gig in Boston.
"Was this again, a means for SaMANtha to earn more money through Lindsay's presence? Did SaMANtha's fee drop so much and so quickly when word got out that they parted ways? Are we so blind? Is Lindsay so blind?"
And he goes on to plead with those around his daughter to help her - because he is certain that being around Ronson is destroying the 22-year-old: "I am asking everyone out their (sic) to intervene in every way possible to help Lindsay, and quite possibly, save her life. Help this wonderful, good hearted and gifted young lady to see what SaMANtha is doing to her and how she is destroying her life.
"Help her to see that ever since SaMANtha came into her life, nothing good has come of it. As a matter of fact, Lindsay hasn't used her gifts like she did before meeting SaMANtha. Just LOOK! The proof is there! These aren't just words, but FACTS! PLEASE HELP!"