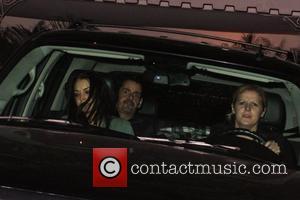 Lindsay Lohan has slammed her estranged father for telling the press she contacted him during his recent stint in hospital - calling him "a liar".
The Mean Girls star has broken contact with Michael Lohan in recent months after he voiced concerns for her health via the media - urging her to cut back her partying and address her issues.
The actress, who has accused her father of worsening her problems by going public with his views, was said to have been back in touch with her dad after he was admitted to hospital earlier this month with a heart complaint.
Lohan claimed his daughter had sent him a text message to enquire about his health, but she's adamant his claims are not true.
In a post on her Twitter.com page she writes, "My father is a liar... is all false!"