Lohan Refuses To Pay Up For Locksmith She Called 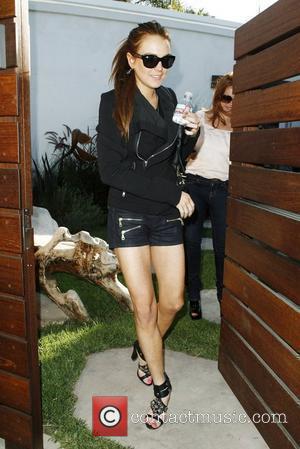 Lindsay Lohan was forced to call in a locksmith when she found herself stranded outside on/off girlfriend Samantha Ronson's Hollywood home on Tuesday night (07Jul09) - but refused to pay him when she discovered another way into the property.
In video footage posted on TMZ.com, the Mean Girls actress is seen walking around the front entrance of the DJ's house as a friend, known only as Christy, watches the professional work on unlocking the door.
Lohan is then heard telling her pal, "What the f**k, the lock just came undone", referring to one of the windows, before disappearing out of view as her pal told the locksmith, "You know what sir, we already got in, thanks. We just broke in. We just found a way in."
But the man refused to leave without at least collecting his $39 (£26) call-out fee - and Lohan turned to the paparazzi who were capturing her every move for advice about what to do.
She told the TMZ videographer, "This guy... is asking me to pay him but he didn't get me in, Christy did. Can you tell him? He didn't even get me in. He's trying to charge me $300. I've paid these guys before, $80, and now he wants money for trying to get me in, he didn't do his job!"
After being encouraged not to hand over the cash, Lohan offered the locksmith $20 (£13), before returning indoors and refusing to pay anything, prompting the man to return to his van empty-handed.