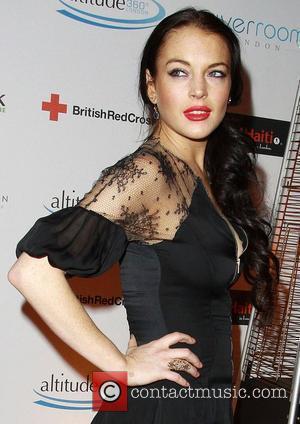 Picture: Lindsay Lohan arrives for the 'Brit Celebration in aid of Haiti' held at The River Room London, England - 16.02.10

Lindsay Lohan refuses to rule out a reconciliation with ex-girlfriend Samantha Ronson - because she still loves the DJ.
The couple's tumultuous on/off romance came to an end last year (09), but despite a public argument with her former lover earlier this month (Feb10), Lohan admits the pair may get back together.
And the Mean Girls star insists Ronson will be the only woman she ever dates, because she's never had an interest in same-sex relationships.
She explains, "I never really thought about women before - it kind of just happened with Samantha. It surprised me. We're still in touch... If I wasn't with Samantha, I would probably be with a boy next. She's the only woman I've been attracted to. We love each other. We might reconcile the relationship, maybe. I don't know."
And Lohan has blamed the glare of the spotlight for amplifying their arguments: "Everyone has ups and downs - it's normal. But in front of the public eye they're going to take the downs and make it seem like they're a million times worse. That comes with the territory. It was a big deal for me because I've never had a relationship as public as that, especially being with a girl for the first time. That was really scary for me. But I didn't care because I love her."