Lohan Caught Up In Nightclub Clash 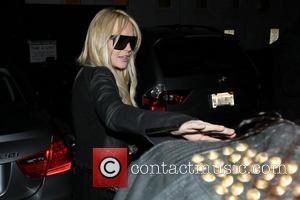 Lindsay Lohan was caught up in a clash between actress Paz de la Huerta and a model during a night out in New York at the weekend (19-20Mar11).
The troubled movie star was enjoying drinks with her pal Samantha Swetra at a Manhattan bar on Saturday night (19Mar11) when de la Huerta approached their table for a chat.
But the Boardwalk Empire actress lost her footing and took a tumble, prompting Swetra to break down in a fit of giggles - and de la Huerta reportedly failed to see the funny side.
She allegedly lashed out at Swetra and also smashed a bottle, showering the actress' leg with glass as a stunned Lohan looked on, according to the New York Daily News.
A source tells the publication, "Blood was dripping down (Swetra's) leg. Lindsay was pulling shards of glass off of it."
De la Huerta was allegedly escorted from the Top Of The Standard venue, and Lohan and Swetra - both looking "horrified" - left shortly afterwards.
Swetra was later seen sporting a bruised face and a swollen lip, and tells the publication she wants to press charges over the alleged incident.