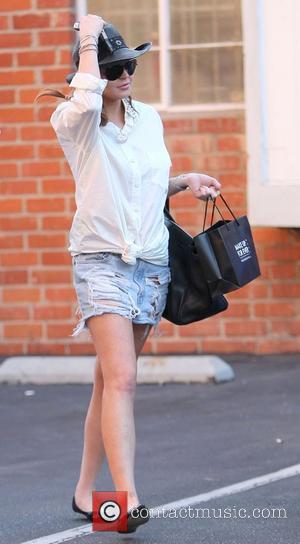 Picture: Lindsay Lohan leaving 'Make Up For Ever' via the back door heading for her car on Robertson Boulevard. Los Angeles, California - 01.08.12

Lindsay Lohan's net worth took a much needed boost this year, after she raked in more than $2 million for various 'comeback' projects. Plagued by legal problems and prison sentences, life didn't look too rosy for Lohan in 2011, but things have changed dramatically and the actress is now reaping the rewards.
As was widely reported at the time, Lindsay Lohan 's Playboy magazine shoot made her $1 million (she appeared on the cover of the December issue to a positive response from readers). After finishing her probation, she landed the role of Elizabeth Taylor in the Lifetime movie 'Liz and DICk', picking up a cheque for $300,000 in the process. Though she was only paid $6,480 to star in the Bret Easton Ellis' penned 'The Canyons' - it's likely that she will benefit down the line should the film be received well critically. Elsewhere, Lindsay is about to sign on to star in 'Scary Movie 5', alongside Charlie Sheen, and will cash in a cool $200,000 for her troubles. In addition, the actress was paid a handsome amount for her appearance on 'Glee' and still pulls in money for being the face of Phillip Plein and Jag Jeans. According to Tmz.com - who published the finances - she also makes between $2,000 and $10,000 by tweeting endorsements for several companies.
What with her newfound friendship with Lady GaGa, and a couple more projects said to be on the horizon, we'd say the comeback is just about complete.