Lindsay Lohan is writing a tell-all book about her life, which she started as a series of journal entires in rehab. 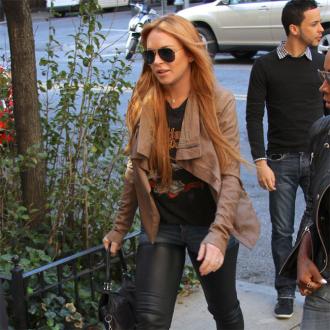 Although the book is in its early stages, Lindsay started it as a series of journal entries while in rehab.

The book is expected to see Lindsay open up about every aspect of her life including becoming a child star, allegations of drug use, relationships with famous people - including her same sex fling with Dj Samantha Ronson - legal troubles and rehab stints, her most recent of which saw her complete 90 days of court ordered treatment in California.

Since leaving rehab at the end of July, Lindsay has sworn off drinking and partying and moved from Los Angeles to New York.

However, earlier this month she was accused of ordering a friend to beat up socialite Barron Hilton at a party in Miami, although witnesses maintain she was sober at the party.

Journalist Lindsay MaHarry wrote: ''Due to her probation, and the $2 million sobriety contract with Oprah [Winfrey], she was laying low, firmly on the wagon.''

After leaving rehab, Oprah helped Lindsay turn her life around, and inked a deal for an eight-part documentary series about her post-rehab life for her OWN network, which reportedly includes a clause that Lindsay must remain clean and sober at all times.

Oprah has said of the star: ''I believe that she believes that she is ready to move forward in her life. We'll see. I'm anxious to see whether or not this young woman ... will be able to allow us into her life and let us see the trajectory of trying to put the pieces back together.''