Lindsay Lohan is to be offered a plea deal that would see her spend two months in a residential rehab clinic in lieu of jail time. 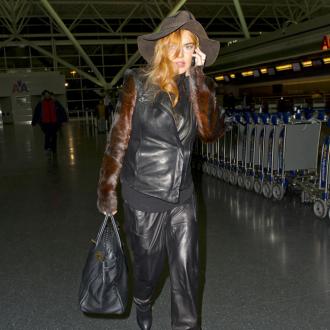 Lindsay Lohan is to be offered a plea deal that would see her spend two months in rehab.

The 26-year-old actress - who is facing charges of resisting, obstruction, providing false information to a police officer and reckless driving in relation to a car crash last June - reportedly smelled of alcohol when she was arrested on the Pacific Coast Highway and an unspecified bottle of alcohol was found next to her Porsche, though she wasn't subjected to a sobriety test, and prosecutors are reportedly planning to offer her a new deal that would avoid jail time and help her tackle her problems.

According to TMZ, the Santa Monica City Attorney dealing with her case might be prepared to strike a new deal for the troubled redhead that would see her spend 60 days - four months less than originally suggested - in a residential rehab facility.

Lindsay - who has had drug and alcohol problems in the past - will also be expected to attend Alcoholics Anonymous (AA) meetings and undertake community service under close supervision.

However, Los Angeles City Attorney is also involved in the case as they are dealing with Lindsay's probation violation stemming from conditions set following a misdemeanour theft case in July 2011 and originally wanted her to be jailed for the offence, though they may be persuaded to change their stance.

It was recently revealed that the attorney had appealed for Lindsay to be spared jail.

He wrote in a letter to prosecutors: ''Lindsay will gladly be participating in intensive psychotherapy, submitting herself to regular screenings and contributing her time to the production of public service messages.''

He also said the 'Liz & Dick' actress is willing to speak to young people in schools, hospitals and other places ''where she may provide inspirational talks,'' before adding that he is currently exploring the idea of a Lindsay Lohan foundation that will provide a non-profit program to benefit young people.