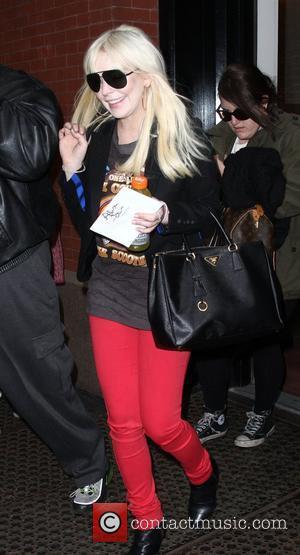 Picture: Lindsay Lohan sporting a Prada handbag while out and about in New York New York, USA - 02.03.12

Lindsay Lohan returned to the screen last night (3 Mar 2012) by hosting 'Saturday Night Live'. However in the wake of her stint as host, Lindsay Lohan has been criticised for her performance.

In a series of skits, Lohan poked fun at all of her past demeanours. She opened the night stating: 'I feel lucky and grateful to be here tonight. And that's why I really want to thank all of my friends at SNL who trusted me enough to have me back.' Comedians such as Kenan Thompson and Kristen Wiig joined her for mockery as Thompson asked to check her eyes and Wiig turned a hug into a full body check for drugs, screaming 'She's clean!'.

Whilst fans argued that the performance was solid, reviews have come out tepid. TVLine states: '"I was genuinely hoping she'd score some big laughs as host of this week's 'Saturday Night Live'. Unfortunately for the troubled actress, however, there's only so much one can do with setups built around prison-rape jokes or the sight of Fred Armisen in drag getting repeatedly hit by a car.' Entertainment Weekly even questioned if she was the worst host of the year whilst Washington Post claimed: 'In essence, this was hardly a disaster on par with, say, Lana Del Rey. But Lohan also didn't fully reclaim her status as a young comic performer worthy of casting in major Hollywood projects.'

Lindsay Lohan will next be seen in 'InAPPropiate Comedy' alongside Rob Schneider, scheduled for release later this year.