The Wanted have revealed Lindsay Lohan told them all about her 90-day stay in rehab when they met up with her recently. 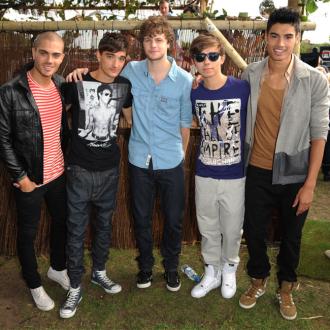 The Wanted quizzed Lindsay Lohan about her time in rehab.

The 'Mean Girls' actress - who previously had a fling with band member Max George - recently met up with the British boy band after completing her 90-day court ordered substance abuse programme at the Cliffside Malibu treatment centre in California, and the boys admit they grilled her about the experience.

Max, 25, said: ''We called her just after she left to make sure she was OK and she ended up coming to one of our shows in Los Angeles. She's off the booze and doing great.''

Bandmate Jay McGuiness, 23, added: ''We were curious, asking about what rehab was like. She said there was therapy and lots of talking to screwed-on people and learning about other people's problems.''

The 'Walks Like Rihanna' hitmakers - also consisting of Siva Kaneswaran, Tom Parker and Nathan Sykes - partied with the 27-year-old star in the months leading up to her rehab stint, but they are ''happy'' to stop the raucous nights out in order to support Lindsay's sobriety.

Jay told heat magazine: ''She needed time away from that world. We told her we were proud of her and we thought things were going to turn around for her.''