Lindsay Lohan is getting advice from 'Inception' star Tom Hardy on how to stay sober following her release from the Betty Ford Clinic. 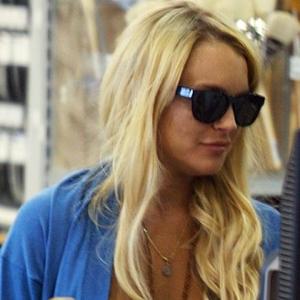 Lindsay Lohan is getting advice from Tom Hardy on how to stay sober.

The 'Mean Girls' star - who was released from the Betty Ford Clinic last week after completing a three-month court-ordered rehabilitation programme - has become close to the 'Inception' actor after being introduced by mutual friends.

Sources claim Tom - who has been sober since 2003 after battling his own drink and drug addiction - has been advising the 24-year-old actress on how to stay away from temptation and she has been taking his words seriously.

As well as befriending Tom, 33, Lindsay is set to get a new housemate.

The 'Machete' star recently moved to a new pad in Venice Beach, Los Angeles, but won't be living there alone as a patient she met at the Betty Ford clinic will also be moving in.

The girl - who has been sober longer than Lindsay - will share the place and won't pay any rent because she is struggling for cash at the moment, reports gossip website TMZ.

Lindsay has also been seen out with ex-girlfriend Samantha Ronson and while they had dinner in West Hollywood over the weekend, insiders insist they are not back together.