Lindsay Lohan is reportedly trying to lose 20lb in 20 days to get her movie career back on track. 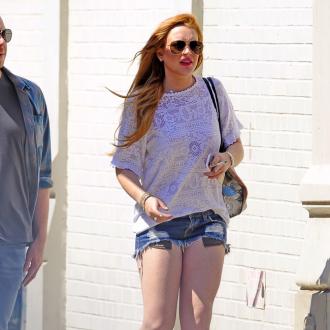 Lindsay Lohan is reportedly trying to lose 20lb in 20 days.

The 27-year-old actress, who recently left rehab after 90 days of court-ordered treatment for drug and alcohol abuse, is determined to get her movie career back on track and has turned to the drastic Master Cleanse diet in order to lose weight before hosting US comedy show 'Saturday Night Live' later this month.

A source said: ''It's really extreme, she hasn't even got 20lb to lose. But Lindsay won't listen to anyone. She's paranoid about having a double chin and is convinced that getting skinny again will mean more film roles.''

The Master Cleanse only permits dieters to drink a concoction of lemon juice, cayenne pepper and maple syrup, and was thought to have been used by singer Beyonce Knowles in order to lose weight for her role in 'Dreamgirls'.

Friends of the 'Mean Girls' star are now worried the extreme weight loss plan could have a negative effect on Lindsay, who is still adjusting to her sober lifestyle.

The source added to heat magazine: ''They're worried this diet is just another way for her to abuse herself. And when she's low on energy, that's when her defences are down, which is a problem for someone who's only just come out of rehab.''