Lindsay Lohan left Duran Duran ''hot and bothered'' following a recording session in December, which resulted in the track 'Danceophobia' which will feature on their new LP 'Paper Gods'. 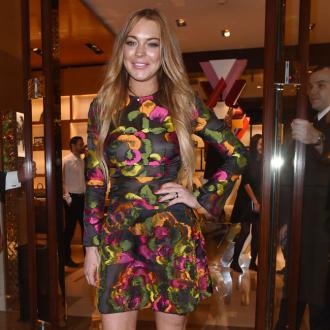 Speaking to BANG Showbiz at the O2 Silver Clef Awards at the Grosvenor House Hotel in London on Friday (03.07.15), he said: ''She has really great charisma. We were hot and bothered for about three weeks after she left the studio.''

The 56-year-old musician explained her appearance on their record almost didn't happen due to her hectic schedule although they eventually decided to drag her down to the studio in December to ensure she featured on the track.

He explained: ''We had this slot on the album and it was a very specific part on a song called 'Danceophobia', it's like the part of a doctor talking to someone, done in a rather naughty way, and we were racking our brains thinking who could do this vocal and I thought, 'Wait, Lindsay's in town' because she was doing 'Speed The Plough', and I said, 'Shall we give her a call? Yeah let's give it a go.'

''Getting Lindsay in a studio is not easy - it took a whole month to get her in. Eventually I had to drive up to her flat in Mayfair, stick her in a car and then bring her to the studio. But we got her in there and as soon as she opened her mouth on this part, she had exactly the voice for it. She's brilliant.''

Their musical collaboration wasn't their first time meeting though, as they originally bonded after Lindsay opted to mimic the 'Girls on Film' singer at a party.

He revealed: ''I met Lindsay in a dressing room in New York about 10 or 12 years ago. We were doing some TV show and she was having her make-up done and she went, 'Oh my god I went to a fancy dress party last night and I went as you!'