Lindsay Lohan is very ''grateful'' to have scored a guest slot playing a bride on sitcom 'Eastbound & Down'. 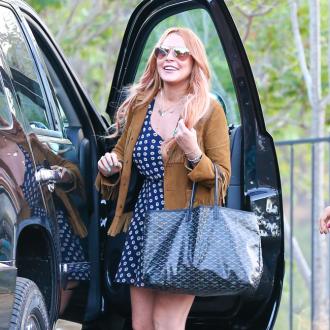 Lindsay Lohan will guest star on 'Eastbound & Down'.

The 27-year-old actress has landed a cameo role on the raunchy sitcom's fourth season, playing the daughter of one of the main characters.

HBO confirmed to E! News that Lindsay appears as a bride in the wedding scene she shot on Wednesday (14.08.13), which was set several years in the future.

Lindsay also shared a glamorous 'selfie' with her fans, showing her posing in costume with her red hair tumbling across her shoulders in retro curls.

'Eastbound & Down' is co-produced by Will Ferrell and stars Danny McBride as a former baseball star who returns to his hometown to teach physical education.

The 'Mean Girls' actress has enjoyed a career renaissance since leaving Cliffside rehab centre in Malibu last month, where she completed 90 days of court-ordered treatment therapy.

Lindsay has successfully guest-hosted Chelsea Lately', as well as pouring her feelings out to Oprah Winfrey in a revealing chat.

The star has also inked a $2 million deal with Oprah and her OWN network to make an eight-part documentary about the ups and downs of her career.