Lindsay Lohan Insists Her Partying Days Are Over 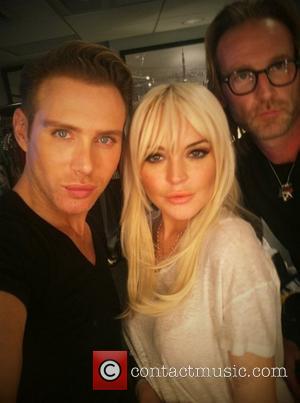 Picture: Lindsay Lohan posts this pic online with the caption, 'at SNL with @LindsayLohan and @PeterButlerHair Shooting promo for her 4th time hosting!' USA - 28.02.12...

Lindsay Lohan says her days spent under house arrest have made her "more of a homebody", insisting her partying days are well and truly behind her. The starlet is attempting to reignite her once thriving Hollywood career after a series of legal and personal issues.
Speaking to Matt Lauer on America's Today Show (set to air on Thursday March 1, 2012), the actress said, "That's not my thing anymore (partying). I went out, actually, a few months ago with a friend. And I was so uncomfortable. Not because I felt tempted, just because it was just the same thing that it always was before. And it just wasn't fun for me. I've become more of a homebody, and I like that". The 25-year-old is certainly making the right moves to win back her once glittering status - she has signed on to guest host comedy sketch show Saturday Night Live, and it is thought a series of well-written self-deprecating jokes could see her garner favor in Hollywood. She will also set to play screen legend Elizabeth Taylor in the forthcoming television movie 'Liz and DICk', which chronicles the tumultuous love affair between Taylor and the Welsh actor Richard Burton. Though her career appears to be on the up, Lohan says is all too aware she will have to prove herself once again, saying, "You know, with Snl, being on time, being, you know, keeping my - can't say the word - but stuff together".
The actress has also signed on to feature in the 2012 movie 'Inappropriate Comedy', with Adrien Brody, Rob Schneider and MICHELLE RODRIGUEZ.