Lindsay Lohan claims a painful looking scrape on her leg was caused by a Citi bike in New York. 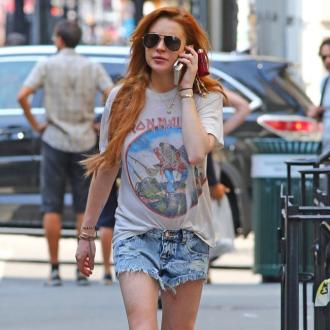 Lindsay Lohan has been injured during a bicycle ride.

The 'Mean Girls' star posted an image of a nasty looking cut on her Instagram account yesterday (03.07.14) and blamed the injury on a Citi Bike - which are available to rent by the public as part of New York City's bike sharing scheme.

The photo shows Lindsay - who is dressed in denim shorts - with a red scrape along the top of her thigh.

Linday's injuries only added to what seems to have been a difficult week for the star after it was announced she was suing the creators of 'Grand Theft Auto' for using a character in her image without her permission.

The 'Canyons' star has filed a civil lawsuit against the company Take-Two Interactive over the character named Lacey Jonas for an unspecified sum of money.

The legal papers claim the ''game features a mission where the plaintiff's look-alike asks another character to take her home and escape the paparazzi'' and features a character sporting the same '' likeness, clothing, outfits, clothing line products, ensemble in the form of hats, hair style, sunglasses, jean shorts worn by [Lohan]...before the release of the GTA V video game.''

Case documents also note that the character parties at infamous celebrity haunt, the Hotel Chateau Marmont in West Hollywood, ''a place where the plaintiff once lived and often frequents''.

Even the video game's cover strikingly resembles a famous picture of Lindsay in a swimsuit taking a selfie and making a peace sign.