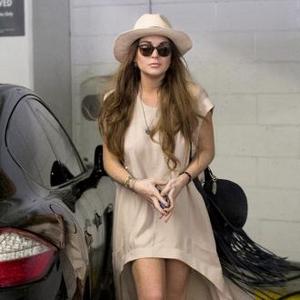 The 26-year-old actress - who has previously posed nude for Playboy magazine - appears as the adult film star's lover in forthcoming thriller, and James insists the brunette beauty was ''super professional'' while filming their X-rated scenes in his big screen debut, and he ''learned a lot'' from her.

He said: ''Working with her was awesome. She's super professional; super great. She's a fantastic actress, it was really, really awesome. I feel like I learned a lot from her like in the scenes we did together, they were my stronger scenes.''

James appears alongside 'Milk' star Gus Von Sant and 'Desperate Housewives' beauty Tenille Houston in the movie - which tells the story of a group of youths and their sexual escapades in Los Angeles - and he credits Lindsay for bringing out the ''best'' in his acting ability.

Speaking in a video on TMZ.com, he added: ''Working with people who are really strong actors and very talented and stuff brings the best out of you. It was very helpful to me as an amateur.''

James recently revealed Lindsay has used her years of acting experience - which has seen her star in 'Freaky Friday' and 'Mean Girls' - to help bring the best out of the characters in the movie.

He said: ''So far it's been a pretty awesome experience, everything's been really fun.