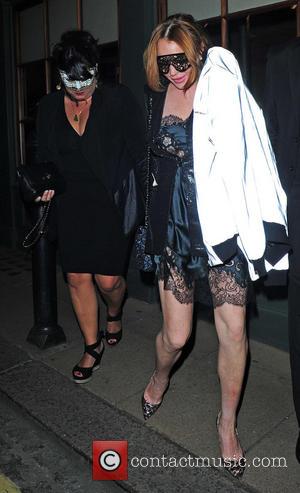 Lindsay Lohan's West End debut wasn't quite the dream the actress was hoping it would be - she appeared not to know her lines and stumbled through some of the dialogue in David Mamet's Speed-the-Plow on Wednesday night (24Sep14).

The Mean Girls star was hoping the London play would help revive her flagging acting career, but it's clear her comeback still needs a little work.

The 28 year old had to take line prompts from crew members offstage and read some of her dialogue from a book.

But, despite the fact that one audience member called the play a "car crash" on Twitter, Lohan was all smiles as she took her curtain call alongside co-stars Richard Schiff and Nigel Lindsay, and accepted a bouquet of flowers.

Others who witnessed her West End stage debut insisted Lohan finished strongly and was "surprisingly good" in places.

One critic tells WENN Lohan appeared nervous and seemed a little annoyed when audience members found one of her most serious monologues funny.