Lindsay Lohan Faced With Barrage of Rehab Questions On Letterman

Lindsay Lohann remained tight-lipped about her past rehab visits on 'The Late Show with David Letterman' yesterday (09.04.13). 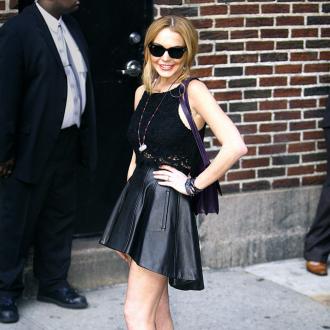 Lindsay Lohan was quizzed about her stints in rehab on 'The Late Show with David Letterman' yesterday (09.04.13).

The troubled star made her first TV appearance on the chat show after pleading ''no contest'' to charges of lying to police about driving during a car crash last June, in which she was sentenced to 90 days in rehab for - beginning later this year.

During her interview with Letterman, Lindsay refused to talk about her previous stints in treatment facilities - which have occurred five times since 2007 - and remained tight-lipped on whether she had a problem with alcohol addiction.

She said: ''We didn't discuss this in the pre-interview. I'm just saying to everyone ... Now you sound like Dr. Phil. We've discussed this in the past.''

However, Lindsay, 26, insisted her ordeal is a ''blessing'' and feels it has helped her realise she needs to continue her acting career to remain well.

Speaking from the hot seat, she said: ''To be honest, I'm happiest when I'm working - the healthiest.

''I think this is an opportunity for me to focus on what I love in life. And I don't think it's a bad thing. I think it's a blessing.''

The 'Liz & Dick' actress missed her deposition at court in Los Angeles yesterday regarding her case with photographer Grigor Balyan, who claims her assistant hit him outside a nightclub in 2010.

Linday's attorney, Julia Azrael, claims she tried to warn the involved parties last week that she couldn't get a hold of her client, but the hearing hadn't been rescheduled.